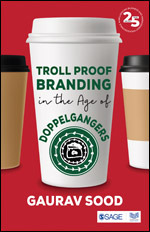 Clever strategies such as emotional and cultural branding can only help your brand go as far as one little slip from grace. In the blink of an eye, your brand’s image can be tarnished by its monstrous doppelganger. Tweets by angry fans along with memes about your brand can become your worst nightmare.

Troll Proof Branding in the Age of Doppelgangers captures the evolution of the brand alter-ego, also known as brand doppelganger, created by consumers, anti-brand activists, competitors, opinion leaders, media and the public. The book discusses the world of monstrous doppelgangers and various reasons and situations that create negative imagery of personal and public brands. Most of the time, these doppelgangers are the result of the company’s own faulty products and complacent attitudes towards consumer feedback, for instance, Pepsi and McDonald’s anti-health and obesity-promoting menu. But there are also brands like Starbucks that have their customer base built on quality and emotional loyalty to the brand.  And still, Starbucks’ reputation eventually got overshadowed by its evil twin—the one who crushes the local competition by making mom and pop stores run out of business. This means that even an emotional branding popularly used by brands can backfire! In contrast, Nike, when attacked by its doppelganger, bounced back by installing a code of conduct in its factories— SHAPE: Safety, Health, Attitude, People and Environment. Then, there are cases of personal brands such as Ravish Kumar, a seasoned Indian journalist, and Alia Bhatt, the Bollywood actress, being trolled online by anti-fans.

This book aids you in developing strategies to counter the impact of your brand doppelgangers.

‘A very insightful book on how to manage and counterbalance a new challenge to world-class brands: antibrand activists and negative influencers in the age of social media. Dr Sood offers very practical strategies to shield your brands from negative attacks and fake news.’

‘Branding has never been more fun to read! From fake news to brand hacktivism, the author cautions against these various weapons of brand destruction and provides strategies to counter your brand’s doppelganger.’

‘This book is full of fun stories and examples of brand doppelganger imagery. The author shows how fake news and brand hacktivists can destroy your brand and provides strategies needed to counter the doppelgangers. A must-read for all branding professionals, students and pop culture followers.’

‘Gaurav’s passion is infectious, and the book has a compelling narrative on the brand of wicked doppelgangers who have an aim in sight to tarnish the image of brands. The author interestingly weaves the story around the evolution of doppelganger in the virtual world and his methodologies of carefully crafting negative imagery, creating attractive but damaging memes, trolling the brands exploiting their vulnerable spots and hacking their information to deliberately expose the negative sides of the brand. The doppelganger can be a harassed consumer, anti-brand activist, a clever competitor, an influencer or a media. The author plays with the fire of torching the brand of the companies through developing a brand alter ego, a doppelganger who can be a troll, hacktivist or an influencer. The topic is contemporary though having lots of grey and dark shades. Each page is generously scattered with carefully researched brand examples. Gaurav strategically establishes the factors leading to the creation of the brand doppelganger imagery, reassuringly emphasizes the art of storytelling and suggests counter strategies to combat and manage the menace of doppelgangers by bringing in the brand’s positivity through knowing the pulse of their consumers and genuinely responding to their wants, needs and queries. The author has a razor-sharp insight and incisive analytic ability to bring to the fore the finer details of the uncanny world of the doppelganger, the brand alter ego, that makes this book one of the best branding’s reference books around and a must-read for students, educators and industry professionals alike.’

‘Dr Gaurav Sood has written an amazing book on branding which is much needed by the industry and academics. The entire branding paradigm has changed as there are drastic changes among the consumers, companies, competitors, media and society. This change is wonderfully narrated in the book. Must-read for all the marketing and business professionals.’

‘A must-read book for branding enthusiasts and pop culture followers.’

‘This book has some very interesting insights on important issues such as brand doppelganger imagery, culture jamming, fake news and internet trolls that many brands face today.’

‘This book is a storyteller! It weaves real cases from the world of branding to explore the phenomenon of brand doppelganger imagery.’

‘A must-read for all digital marketers as this book analyses various forms of online consumer backlash and how consumers, competition and public at large create a brand doppelganger imagery using the social media platforms to damage the brand’s imagery.’

‘The concept of brand doppelganger has been very fascinatingly brought up by Dr Sood and his breadth of experience in industry and academia has lent weight to his insights and theories on the subject. Media landscape, both offline and online, is haunted by fake news, trolls and consumer backlashes which make the big brands vulnerable to the creation of their own doppelganger.’