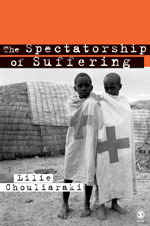 Share
Other Titles in:
Cultural Studies (General)
June 2006 | 240 pages | SAGE Publications Ltd
Download flyer
`The work is on an important topic that has been oft debated but rarely systematically studied - the political, cultural, and moral effects of distant news coverage of suffering. [The book] is extremely well steeped in the relevant literature, including semiotics, discourse analysis, media and social theory and makes a fresh methodological contribution by looking at the codes and formats of news about suffering. It has a fresh vision and answer to some of the stickiest moral and media problems of our time… and deserves to find its place among important books about the moral aspects of media and society in our times' - John D Peters, F. Wendell Miller Distinguished Professor, University of Iowa `Lilie Chouliaraki grounds her sophisticated arguments in meticulous research. The result is a work of important scholarship that might even make us think about the world and its mediation in profoundly new ways' - Roger Silverstone, Professor of Media and Communications, The London School of Economics and Political Science `Few intellectuals command this scope from classical rhetoric to the cutting edge of contemporary social theory as [Lillie Chouliaraki] is doing in her new book The Spectatorship of Suffering. This book is destined, in my mind, to be foundational for our understanding of not just the media but of the highly complex social process of mediation' - Ron Scollon, Professor of Linguistics, Georgetown University

This book is about the relationship between the spectators in countries of the west, and the distant sufferer on the television screen; the sufferer in Somalia, Nigeria, Bangladesh, India, Indonesia, but also from New York and Washington DC. How do we relate to television images of the distant sufferer? This question touches on the ethical role of the media in public life today. It addresses the issue of whether the media can cultivate a disposition of care for and engagement with the far away other; whether television can create a global public with a sense of social responsibililty towards the distant sufferer.

A very engaging and thorough account of the relationship between the media and understandings of suffering.

The Practice of Cultural Studies

Perspectives on Loss and Trauma