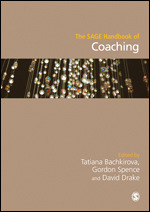 The SAGE Handbook of Coaching presents a comprehensive, global view of the discipline, identifying the current issues and practices, as well as mapping out where the discipline is going.

The Handbook is organized into six thematic sections:

It provides the perfect reference point for graduate students, scholars, educators and researchers wishing to familiarize themselves with current research and debate in the academic and influential practitioners' literature on coaching.

What makes life really interesting is when we go beyond our comfort zone. Coaching has proven to be a highly effective way to make this journey. Anybody interested in understanding what coaching is all about would do well to have a good look at the Sage Handbook of Coaching, edited by Tatiana Bachkirova, Gordon Spence and David Drake. This thorough compilation of the field will help coach and client alike to test the unknown waters of their mind.

This exciting new Sage Handbook of Coaching provides a wealth of perspectives on the rapidly evolving discipline of coaching and its evidence-base. Well-respected authors explore definitions and boundaries of coaching, contemporary topics such as cross-cultural coaching and group and team coaching as well as challenging questions such as whether coaching can or should be ‘value-free’ and also whether coaching can make a contribution to societal change. This book should be the starting point for anyone undertaking coaching research or seeking an in-depth discussion of current issues in coaching.

Everyone needs development and some actually want it. Training is cumbersome, expensive and embarrassing and education classes are ineffective. Coaching has surged in popularity to fill this gap. The practice has preceded the research and scholarship. But famous and well respected scholars Tatiana Bachkirova, Gordon Spence and David Drake have compiled an amazing handbook which is the reference for all things about coaching. The authors of chapters are the leading scholars and reflective coaches in the world and their students. This is better than the Internet for learning about and answering questions about coaching. Whether you are a practitioner, eager to learn about coaching or an academic curious about its effects, you will refer to it often.

This text, written by recognised experts in the field, is usefully critical and academically informed. Each chapter provides a comprehensive overview of the topic covered and treats the various tensions and differences in each sub-field, in an even handed way. This text probably works best for students studying coaching at Masters level and gives the reader a good grounding in the various facets of coaching theory and practice

This Handbook is an illuminating and accessible reference to a sophisticated apprehension of the fast growing discipline of coaching. Engaging their audience into the current and emerging debates of coaching, authors not only brilliantly establish the systemic and multidisciplinary nature of the field, but also expand our horizons to under-discussed, but vital, approaches and dimensions of coaching. This compelling invitation to constructively and critically embrace the complexities, specificities and potentialities of this profession definitely advances our knowledge, perspectives and practice in a groundbreaking way.

This is a wonderful addition to the coaching scholarship. Thoughtfully organised , it addresses core contemporary topics in a way that is evidence based. The book  offers actionable lessons for coaches, purchasers of coaching and researchers in this area.

The SAGE Handbook of Coaching provides an exciting state-of-the-art overview to the rapidly growing field of coaching. Written by experts, this Handbook will be of interest to trainee and experienced coaches. The editors and authors are to be congratulated for this scholarly contribution to the profession.

How I wish I had had this book when I did my MA .... what it contains is so broad, so deep, so well constructed, that I almost think it would have provided me with all I needed to compile a bibliography and complete my dissertation

The Coaching Relationship in Practice

The SAGE Handbook of Mentoring

An Introduction to Coaching Skills

SAGE Guide to Careers for Counseling and Clinical Practice

An Introduction to Helping Skills

Reflective Practice and Personal Development in Counselling and Psychotherapy