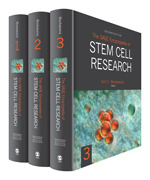 Stem cells are the engine rooms of multi-cellular organisms.  While fascinating in and of themselves, they are also clearly fuelling excitement and potential in traditional areas of developmental biology and in the field of regenerative medicine, where they are believed to hold much promise in addressing any number of intractable medical conditions.  However, along with exciting breakthroughs, frustration and controversies swirl through this rapidly moving area of research.  What does the average person make of all this, and how can an interested scholar probe the vast sea of new information?  The first edition of the Encyclopedia of Stem Cell Research, published in 2008, gave general readers a reference manual to gain a clear understanding of basic concepts in stem cell biology along with socio-political issues facing the field.

Much has happened since the articles for the first edition were written in 2007, and to capture developments, the updated second edition will expand from two to three volumes and will present more than 470 articles (320 revised from the first edition, augmented by 150 entirely new) that explore major topics in ways accessible to non-scientists, thus bringing readers up-to-date with where stem cell biology stands today, including new and evolving ethical, religious, legal, social, and political perspectives.

·         A Glossary that will elucidate stem cell terminology for the non-scientist.

·         Appendices that include statistics and selected reprints of major journal articles that pertain to milestones achieved in stem cell research as well as documents from hearings and reports on stem cells and cloning, and more.

"The target audience for this source would include upper-level secondary students and undergraduate students seeking basic stem cell biology information, as well as information on clinical trial updates, legislative information, and information on the ethics of stem cell research... Main entry narratives average two to four pages in length; some entries are divided into subcategory topics. Broad categories for articles include topics related to adult and non-adult stem cells, animal models, cancer stem cells, clinical trials in the US and worldwide, industry and educational research institutions, methods to study stem sells, key organizations and people, stem cell applications, and stem cell legislation or information related to country or US state... Most appropriate for high school libraries and college libraries that have a need for academic material on the topics presented."

C. L. Gilson
ARBA
"The SAGE Encyclopedia of Stem Cell Research...is a valuable resource for academic readers at all levels. ...The set is a fine source for novice readers hoping to learn more about stem cell research as well as those who need specific information about detailed aspects of this field of research.  Given the broad appeal of this timely topic, the robust qualifications of the editors and publisher, and the lack of competing titles about stem cells with this depth and breadth, the work makes a welcome addition to any university or college library. Summing Up: Highly recommended. All libraries and levels."
K. M. Sheffield
Clemson University
CHOICE

"The second edition of this encyclopedia updates the 2009 set and still features authoritative signed articles aimed at general readers and undergraduate students....This encyclopedia is recommended for academic and large public libraries, and libraries owning the first edition will want to replace it with this update."

"...The focus on legal, ethical, and industrial issues, as well as the tone of the scientific articles, make [The SAGE Encyclopedia of Stem Cell Research, Second Edition] appropriate for academic institutions with or without stem cell research programs. It would also benefit institutions with science journalism or medical communications programs. Large public libraries with extensive reference budgets may be interested as well."