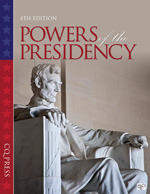 Providing both a historical and contemporary perspective on presidential powers, The Powers of the Presidency guides readers through the presidency as a constitutional office, covering how it was shaped by design at the Constitutional Convention in 1787 and by later constitutional amendments, Supreme Court decisions, and custom and precedent. It discusses the various roles of the chief executive, including chief of state, chief administrator, legislative leader, chief diplomat, commander in chief, and chief economist. The fourth edition of this accessible and affordable work has been significantly updated and features:

·         Coverage of the final years of George W. Bush and the first three years of Barack Obama's presidency

·         Updates on the wars in Iraq and Afghanistan, the killing of Osama bin Laden, and on the treatment of detainees at Guantanamo Bay

·         Coverage of the Arab Spring protests and U.S. involvement in the military intervention in Libya

"Libraries owning previous editions will want to replace with this volume, which is recommended for most public and academic libraries."