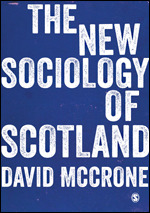 Written by a leading sociologist of Scotland, this ground-breaking new introduction is a comprehensive account of the social, political, economic and cultural processes at work in contemporary Scottish society.

At a time of major uncertainty and transformation The New Sociology of Scotland explores every aspect of Scottish life. Placed firmly in the context of globalisation, the text:

Written in a lucid and accessible style, The New Sociology of Scotland is an indispensable guide for students of sociology and politics.

When Was Scotland?
Making Modern Scotland: The Story of the Twentieth Century
What is Scotland?
Scotland's People
The Scottish Way of Death
Who Runs Scotland?
Inequality, Poverty and Power
Making a Living
Social Class and Social Opportunity
Scottish Education and Scottish Society - Lindsay Paterson
Gendering Scotland
Social Order: Crime and Justice in Scotland - Susan McVie
'Race' and Ethnicity in Scotland
Religion: Have Scots Become Godless People? - Steve Bruce
Belonging: Placing People
'Nothing But Heather': Scotland as Country
Wilful Fragments: Charactersing Scottish Culture
National Identity: Who Do We Think We Are?
Politics and National Identity
'My Granny was a Mctavish': Claiming Diaspora Identity
Playing for the Nation
Seeing Ourselves: The Media in Scotland
Scotland and Stuff: The Sociology of Consumption and Life style
Scotland and the World
Epilogue
Appendix: Timeline, 1900-2016

This masterly book  is the vital text for understanding contemporary Scotland. It is comprehensive in treatment, convincing in argument and a most accessible read.

The book is utterly marvellous: wonderfully clear and amazingly comprehensive.

Effortlessly understands the myriad of social influences and historical complexities that make up modern day Scotland.

David McCrone has written an expertly-judged and thought-provoking book. He situates Scotland within a sociological imagination that will prove vital for the orientation of a small nation through the turbulence of the twenty-first century. Its predecessor Understanding Scotland virtually invented the sociology of Scotland from scratch more than a quarter of a century ago. This time around, The New Sociology of Scotland has radically upped the stakes. It is packed with fundamental issues and illuminating examples, ranging from power, inequality, crime, culture, through to how we belong in different ways to local, national and global communities. As the world appears to become more uncertain and unpredictable, this will become the essential guide for all students of the political, economic and social processes transforming contemporary Scotland.

This is a monumental achievement. It is the definitive account of modern Scotland but its significance goes beyond this. David McCrone’s theoretically sophisticated book will become a classic analysis of how modernity plays out in specific places with their own histories, cultures and politics.

This is an ambitious and hugely timely book, broad in scope but with detailed and balanced argumentation throughout. The New Sociology of Scotland provides a new benchmark in our understanding of Scotland and its significance to a much broader social science. The book goes far beyond Scotland, providing a theoretically informed and empirically rich contribution to some of the most pressing contemporary sociological questions (identity, globalisation, belonging). McCrone's previous work placed our understanding of Scotland at the forefront of better understanding a broader world - this book raises that bar very significantly again.

This marvellous book explores the complexity of Scotland through the many and varied ways in which the experience of Scotland is lived: through the expression of its history and politics, its religion and its sport, its sense of place and its rich popular culture. In the process it draws upon an exhaustive range of academic and literary sources.  It is a beautifully written, magisterial study built on a lifetime of impeccable research and scholarship. As the successor to McCrone's own Understanding Scotland, this book will be the authoritative and indispensable reference for the next twenty five years. It is a model for how fine sociology should be done.

A most useful book for grasping the meaning of new social and political developments in Scotland. David McCrone is a long-standing academic with an authoritative reputation for dissecting the social fabric of Scottish contemporary society. This volume is a most timely contribution for understanding current debates and future scenarios for Scotland and its relationship with the UK and Europe.

McCrone's writing has provided much of the intellectual superstructure for the Scottish Society course I have taught for a quarter of a century. This new book adds further to that construction, given the challenging evidence-based debates and broader sociological canvas it offers up to the reader.

David McCrone’s authoritative work on Scotland – and more broadly, nationalism – is deservedly well known. Deploying his formidable knowledge, and drawing at times on contributions by his colleagues, he has devised a monumental, clear and well organised textbook. This will be a key point of departure for those seeking to understand Scotland today. Moreover, in the fraught context of continuing debate about Scottish independence and in the wake of the far-reaching repercussions of proposed Brexit for the United Kingdom, this is both illuminating and necessary reading.

The New Sociology of Scotland - Chapter 1

Left Front and After

The SAGE Handbook of the History, Philosophy and Sociology of International Relations
Show More Show Less