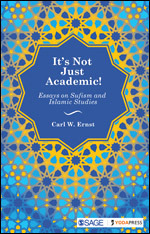 This collection of articles by Carl W Ernst summarizes over 30 years of research, recovering and illuminating remarkable examples of Islamic culture that have been largely overlooked, if not forgotten. It opens with reflections on teaching Islam, focusing on major themes such as Sufism, the Qur’an, the Prophet Muhammad, and Arabic literature. The importance of public scholarship and the questionable opposition between Islam and the West are also addressed. The articles that follow explore multiple facets of Sufism, the ethical and spiritual tradition that has flourished in Muslim societies for over a thousand years. The cumulative effect is to move away from static Orientalist depictions of Sufism and Islam through a series of vivid and creative case studies.

Preface
Acknowledgments
Part 1: General and Critical Issues in Islamic Studies
Between Orientalism and Fundamentalism: Problematizing the Teaching of Sufism
Reading Strategies for Introducing the Qu’ran as Literature in an American Public University
“The West and Islam?” Rethinking Orientalism and Occidentalism
Mu?ammad as the Pole of Existence
It’s Not Just Academic: Writing Public Scholarship in Middle Eastern and Islamic Studies
The Global Significance of the Arabic Language
Part 2: Early Sufism
Esoteric and Mystical Aspects of Religious Knowledge in Sufism
Controversies over Ibn al-`Arabi’s Fusus: The Faith of Pharaoh
Mystical Language and the Teaching Context in the Early Lexicons of Sufism
The Man without Attributes: Ibn ‘Arabi’s Interpretation of Abu Yazid al-Bis?ami
Ruzbihan Baqli on Love as ‘Essential Desire’
An Indo-Persian Guide to Sufi Shrine Pilgrimage
The Stages of Love in Early Persian Sufism, from Rabi`a to Ruzbihan
Sufism and Philosophy in Mulla Sadra
Shams-i Tabrizi and the Audacity of Bayazid Bistami
Part 3: Sufism, Art, and Literature
The Spirit of Islamic Calligraphy: Baba Shah Isfahani’s Adab al-mashq
The Symbolism of Birds and Flight in the Writings of Ruzbihan Baqli
On Losing One’s Head: H?alla¯jian Motifs and Authorial Identity in Poems Ascribed to ?At?t?a¯r
Beauty and the Feminine Element of Spirituality
Sufism and the Aesthetics of Penmanship in Siraj al-Shirazi's Tu Sir al-Mul-azaj (1454)
Jalal al-Din Davani’s Interpretation of ?afi?
“A Little Indicates Much”: Structure and Meaning in the Prefaces to Rumi’s Masnavi, Books 1-3
Wakened by the Dove’s Trill: Structure and Meaning in the Preface to Rumi’s Masnavi, Book 4
Part 4: Contemporary Sufism
Ideological and Technological Transformations of Contemporary Sufism
Sufism, Islam, and Globalization in the Contemporary World: Methodological
Reflections on a Changing Field of Study
Part 5: Persianate Themes
Persianate Islamic Studies in American Universities
Concepts of Religion in the Dabistan
Early Orientalist Concepts of Sufism
Index

This book caters to the cerebral needs of scholar and advanced students of Islam. This book delves into Sufism, Islamic Calligraphy, art and Literature and elucidates these aspects in a manner that only a man of Ernst’s caliber and understanding will be able to relate to it. The author brings out the hitherto unknown facts and fecundity of Islam’s very rich theo- spiritual legacy.

This book opens with reflections on teaching Islam, focusing on major themes such as Sufism, the Qur’an, the Prophet Muhammad, and Arabic literature. Ernst has enumerated upon all embracing, spiritual quality of Islam that’s far removed from the stereotypical image of this faith today. Islam is an Arabic word which connotes ‘submission’ to the Almighty and when one submits oneself to the Almighty sans even a scintilla of doubt and resistance, only the very best is bound to blossom.

“Ernst deserves our compliments for providing a critical background information for poetry and texts, especially the Mathnavi of Rumi, which is difficult to find in many Sufi anthologies... His command of Persian, Arabic and Sanskrit texts is commendable, particularly his objective of ‘how to teach the other’.”