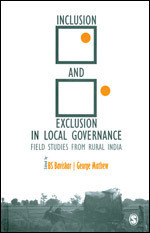 Share
Other Titles in:
Local Government | Political Sociology
January 2009 | 464 pages | SAGE India
Download flyer
Inclusion and Exclusion in Local Governance: Field Studies from Rural India is a product of a rare national-level study conducted in 42 panchayats across 12 states to reveal how democratic decentralization is working in Indian villages. This is done through stories of empowerment as well as discrimination against women, scheduled castes and scheduled tribes (SCs and STs). The contributors have adopted a unique research methodology which may set a trend for future national-level qualitative studies. The field studies offer insights about rural India from a micro-level perspective instead of providing macro-level generalities.

This collection will be of considerable interest to students, researchers, academicians and practitioners working in the fields of Local Governance, Political Sociology and Rural Development.

This collection of studies of local government institutions in twelve Indian states provides valuable insights into decentralisation processes in India. The volume’s contribution to the literature is rooted in its analysis of the social and political variations identified across the twelve states studied, and the common trends that link them together.

Charts, tables, and case studies are used and succeed in making the book comprehensive and illustrative… the comprehensive study based on primary data, detailed fieldwork and scientific data analysis provides comprehensive inputs on the inclusion and exclusion in local governance in India. The book is therefore, an exceptionally insightful account of the nation-wide attempt at decentralization in India and its impact on the excluded group and their inclusion in the rural power structure… It will be of substantial interest to students, researchers, academicians, decision-makers, elected members of the PRIS and those working at the grass-roots.

Inclusion and Exclusion in Local Governance is remarkably insightful. The book, comprising 16 studies from 14 states, captures the ground reality in India’s villages.

The volume is an eye-opener…. Based on solid field data, the book provides meaningful inputs with regard to “inclusion and exclusion in local governance” in India…The findings of the survey may not be unique since they conform to the prevalent ideas; what is however commendable about the study is the confirmation of these ideas, based on mere assumption, by data, drawn out of stringent field survey. And this is what makes the book a class by itself.

The book has many strengths — detailed field work and scientific data analysis being the obvious ones. The panchayati raj institutions presents a complex mosaic that can be understood only when they are viewed with nuanced lens. This is precisely what the book has attempted to do…The book will serve as a necessary references for serious researchers, policy planners and all those interested in grassroots democracy for quite some time to come.

The fourteen case studies…brought together by Baviskar and Mathew, are best seen as meticulous snapshots of a complex, dynamic process of growing enfranchisement, contested by a hierarchic social structure and dominant social groups. The narratives, replete with firsthand observations of what really goes on beyond the national highways and the electronic media, are a veritable treasure trove for those keen on understanding how public life actually takes place in India’s villages…. an entertaining, enlightening, enriching narrative.

Pacific Affairs
This book is a product of laudable effort. The sociological methodology adopted is very well suited to study the subject under consideration. Rich with details of everyday difficulties involved in the process of inclusion...the book can very well serve as a bench mark for a study down a couple of decades later.
Journal of Social and Economic Development, Vol 14, July- December 2013