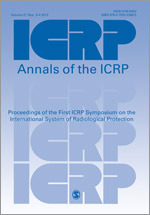 Share
Series:
Annals of the ICRP
Other Titles in:
Radiology
January 2013 | 404 pages | SAGE Publications Ltd
Download flyer
The First ICRP Symposium on the International System of Radiological Protection, or simply ICRP 2011, was held in Bethesda (Rockland) Maryland, just outside of Washington D.C., October 24–26, 2011. This symposium was open to anyone who wished to attend, and no registration fee was charged. Approximately 400 people from 35 countries attended the 17 sessions held over 3 days. The papers in this publication, the Proceedings of the First ICRP Symposium on the International System of Radiological Protection, represent a cross-section of the subjects presented during ICRP 2011. These papers are not recommendations of ICRP and do not necessarily represent the views of ICRP; they are the work of the individual authors. Given the success of ICRP 2011, as evidenced by the great turnout and many very positive remarks from participants, ICRP intends to hold another similar symposium in conjunction with its next joint meeting of the ICRP Main Commission and Committees. The Second ICRP Symposium on the International System of Radiological Protection, ICRP 2013, is now being planned. It will be held in Abu Dhabi in late October 2013, with the financial support of the Federal Authority for Nuclear Regulation of the United Arab Emirates. The search for a venue, and a host, for the third symposium, ICRP 2015, is already underway.