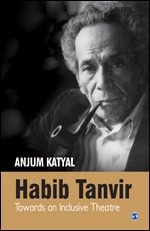 Share
Other Titles in:
Design | Drama
October 2012 | 248 pages | SAGE India
Download flyer
Anjum Katyal's work is the first comprehensive study on the life and contribution of Habib Tanvir to Indian theatre history. A playwright, director, actor, journalist and critic, Tanvir is perhaps best known for the play Charandas Chor. However, his real significance in the history of post-Independence Indian theatre is that he signposted an important path for the development of modern theatre. His productions with Naya Theatre using Chhattisgarhi folk actors established how one could do modern theatre integrated with age-old-yet equally contemporary-folk culture on a basis of equality.

Habib Tanvir: Towards an Inclusive Theatre explores various important aspects of Tanvir's theatre philosophy and practice as he experimented with both content and form. Starting with his early life and work, Katyal charts his professional trajectory from Agra Bazaar to Gaon Ka Naam Sasural, when he was searching for his true form, to Charandas Chor, which portrayed the eventual maturing of his style, and beyond, to cover his entire oeuvre.

Foreword
Anuradha Kapur
Introduction: Making Space for the Oral Tradition in Indian Theatre Today
Growing Up in Raipur, and Early Influences
The Bombay Years
New Directions: Delhi and Agra Bazaar
England, Europe and Brecht
Coming Home to Mitti Ki Gadi
Naya Theatre and Other Milestones
Charandas Chor
Working with the Chhattisgarhis
The Classics and Literature
Connecting with the Folk
Music, Song and Dance
The Political Habib Tanvir
Appendices
List of Plays by Naya Theatre and Habib Tanvir
Awards, Honours and Milestones
Index
An engaging and erudite comprehensive literary biography of Habib Tanvir, the iconic Hindi and Urdu playwright, actor, director, journalist, manager, poet who strode the Indian theatre like a colossus.... Anjum Katyal’s stimulating study explores in great detail the various aspects of Tanvir’s theatre and his sense of purpose that led him in one direction—building an inclusive theatre that would address social issues from a truly Indian point of view.
The Hindu

It’s an ideological justification for the perfect theatrical mix to represent the real India, what she calls ‘inclusive theatre’...Katyal’s writing is easy, the passion for Habib’s work apparent, and for a practitioner or student of theatre the book is interesting, informative and readable. The evolution of a theatrical phenomenon is convincingly documented.

Richly contextualized and authoritative material on Tanvir and his work is scarce.... Katyal’s book is pleasure...an immensely valuable biography of Habib Tanvir and his free, uncompromised art.