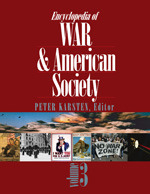 The impact of war on American society has been extensive throughout its nation's history. War has transformed economic patterns, government policy, public sentiments, social trends and cultural expression.

The Encyclopedia is a comprehensive, highly-credentialed multidisciplinary historical work that examines the numerous ways wars affect societies. The Three-Volume Set cover a wide range of general thematic categories, issues and topics that address not only the geopolitical effects of war, but also show how the United States engagement in national and international conflicts has affected the social and cultural arena.

- a discussion of the three types of effects of war - direct effects, interactive relationships and indirect effects - to illustrate the range of connections between war and American society;

- an exploration of the correlations between wartime expeditions and the experiences of the greater American society, not limited to just the war years but also demonstrating how wartime event impacted society after the conflicts ended;

- a host of documents including passages from letters, diaries, autobiographies, official documents, novels, poems, songs and cartoons, as well as images, graphs and a number of tables of relevant data, surveys and public opinion polls to extend the research capabilities of this reference work;

- a focus on the last 100 years to give more coverage to this, often neglected, wartime era.

Education (both military and civilian)

The Wars themselves and their civilian and military leaders

The Encyclopedia of War and American Society is a `must-have' reference for all academic libraries as well as a welcome addition to any social science reference collection.

This new illustrated history reference work focuses on the past 100 years, since that is the period for wars that have most shaped the present environment in the US. The 328 signed entries from 158 expert contributors are arranged in an A-to-Z format, and cover important individuals, events, books, movies, organizations, themes, and conflicts. . . .This more academically oriented title is suitable for all collections that can afford it.

"While librarians have numerous choices for materials covering warfare and society, there are not as many that cover warfare and its impact on society as broadly or as well as Karsten's. If a library is looking to add to its coverage of wars and their impact or fill a gap, this is an excellent choice. The primary documents and the work's breadth will ensure that a variety of readers find it useful and engaging."

"Editor Karsten, four associate editors, and 153 other expert contributors have produced an excellent reference work . . . Entries are well written and easy to read, and each includes a selected bibliography, suggestions for further reading, and a list of related entries within the set."

"This superb resource, a detailed work examining war and its effects on facets of America, is both comprehensive and readable. It is sure to be a popular reference set and will serve as an extremely useful tool for young scholars seeking insight into the events and their repercussions."

"This set should be in public and academic libraries, and considered for high school library collections as needed."

"The articles are well researched and are filled with solid anecdotes as well as intelligent analysis and commentary. Most reference books about war do not cover the domestic front as well as this work or for the entire length of United States history. Community colleges, four year institutions and graduate schools would do well to add this scholarly work to their collections."