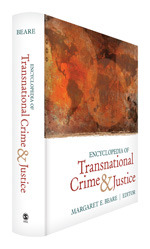 "[The editor's] approach reflects the current scholarly emphasis on victimization rather than criminal structures."