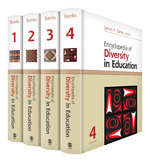 Share
Other Titles in:
Sociology of Education | Teaching Diverse Students
July 2012 | 2 600 pages | SAGE Publications, Inc
Download flyer
With 695 signed entries with cross-references and recommended readings, the Encyclopedia of Diversity in Education, Four-Volume Set, in both print and electronic formats, presents research and statistics, case studies and best practices, policies and programs at pre- and post-secondary levels. Diversity is a worldwide phenomenon, and while most of the entries in the Encyclopedia will focus on the United States, diversity issues and developments in nations around the world, including the United States, are intricately connected. Consequently, to illuminate the many aspects of diversity, this volume will contain entries from different nations in the world in order to illuminate the myriad aspects of diversity. From A-to-Z, this Encyclopedia will cover the full spectrum of diversity issues, including race, class, gender, religion, language, exceptionality and the global dimensions of diversity as they relate to education. There will also be an appendix consisting of a chronology of significant events related to diversity. This four-volume reference work is the definitive reference for diversity issues in education in the around the world.

Concepts, Theories and Definitions of Diversity

Demographics and the Changing American Landscape

Religion in Society and Schools

Curriculum Issues and Pedagogies of Diversity

Diversity in Primary and Secondary Education

"A trawl through this impressive work confirms that it is truly encyclopaedic in both its authoritativeness and in its comprehensiveness of topics and geographic reach...With its remarkable currency...its scholarliness, its scope and accessibility, and its wealth of references, cross-references and recommended reading, no university can afford to be without the online version"

"Well written and feature-rich (reader's guide, chronology, sidebar articles), and the only recent work of its kind, this set will work in large public libraries and is highly recommended for academic collections, especially those that support teacher training programs."

The Encyclopedia of Diversity in Education is scholarly, comprehensive; and worthy of its topic. Providing both definition and background to such a complex and important area of study is no easy matter, and the success of this effort is a tribute to everyone involved. Academic libraries are the prime audience for this encyclopedia but given the interest in educational diversity in some areas of the country, there may be larger public libraries that will find this title of value.

Tom Gilson
Against the Grain

This landmark study serves both as a history of where we've been and a road map to where we need to be.

The Encyclopedia of Diversity in Education should be a standard acquisition for every library and be on the shelves of scholars, researchers, professional developers and educators in general.