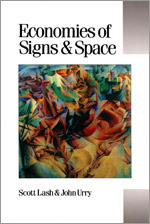 Share
Series:
Published in association with Theory, Culture & Society
Other Titles in:
Cultural Theory | Economic Geography | Social Theory
December 1993 | 368 pages | SAGE Publications Ltd
Download flyer
This is a novel account of social change that supplants conventional understandings of `society' and presents a sociology that takes as its main unit of analysis flows through time and across space.

Developing a comparative analysis of the UK and US, the new Germany and Japan, Lash and Urry show how restructuration after organized capitalism has its basis in increasingly reflexive social actors and organizations. The consequence is not only the much-vaunted `postmodern condition' but also a growth in reflexivity.

In exploring this new reflexive world, the authors argue that today's economies are increasingly ones of signs - information, symbols, images, desire - and of space, where both signs and social subjects - refugees, financiers, tourists and fl[ci]aneurs - are mobile over ever greater distances at ever greater speeds.

`An indispensable, rich, shrewd, and stimulating characterization of the cultural risks and dilemmas generated by globalization.... [the book supplies] bench marks for the present debate on the sociology of culture.... [the book] is an ambitious study that pursues issues of reflexivity in relation to the commodification of signs and symbols that emerge from service industries. The movement from manufacture to service industries, their globalization, and the information and knowledge these generate suggest that reflexivity is a crucial key to understanding class relationships. Debts are to Giddens and Bourdieu, but these form part of a wider enterprise that brings together a vast and unfamiliar literature drawn from the USA, Germany, Japan and England. Material on the food industry, advertising, banking, tourism, the heritage industry, films and publishing, to name a few, is mixed with a theoretical sophistication that provides a unique and indispensable account of the culture industry in all its present permutations. Themes of space, time, memory and place are also embraced in this unparalleled study, a fundamental source book, that should change the contours of debate on culture for some time to come. Written against a dystopia of postmodernism, the study underwrites the importance of culture and reflexivity. It conveys a sense of critical engagement with the "real" world as lived, which is unusual in sociology. One has to look to Bourdieu for a similar sense of compression and engagement in accounts of culture.... intriguing... underlines the significance of Lancaster in the sociological analyses of culture' - British Journal of Sociology


`Reflexivity isn't what it used to be. On the evidence of this book, it's getting better.... This book is important. It has significant implication for several fields, in particular the analysis of organizations: henceforth, say Lash and Urry, these should be analysed in terms of the flow of various circuits through time, space and meaning.... it is an important publication; there is a great deal here for fertile imagination to work through. If I am not very mistaken this text will set some significant agendas' - Asia Pacific Business Review

`A benchmark work of considerable significance.... The evidence presented is often entertaining' - Antipode

`Lash and Urry follow up their influential study The End of Organized Capitalism with an equally ambitious and wide-ranging account of our times.... one of the attractive things about this study is the way in which several influential theories of contemporary Western societies are blended into a sophisticated analysis of late capitalism.... This is a book rich in material for reflecting on contemporary life. It deals with changes in the economy, in urban life, and in work and leisure... There are also some stimulating observations on our new experience of time and space as a result of the `time-space compression' brought about by the revolution in information and communications. Students of society will be quarrying this book for its important insights for many years to come' - Political Studies

`An ambitious and provocative account of the transformations that are convulsing `economies' and `societies' at the end of the twentieth century. The scare quotes are doubly necessary, because in mapping the fin-de-si[gr]ecke constellation of capitalism and postmodernity as a `world of flows', Lash and Urry offer a lucid critique of conceptions of economies and societies as bounded systems and also demonstrate the intricate imbrications of politicoeconomic and socio-cultural processes.... This is a feast of a book: rich in ideas, bursting with theoretical insights and empirical details, and outlining an immensely challenging political and intellectual agenda for the end of the century and beyond' - Contemporary Sociology

`The content of this book is creative, challenging and provocative. Its scope, and therefore relevance, is broad. Of critical value is the recognition that not all societies are organized according to a neo-liberal model, as well as the centrality given to subjective practices and the value of image in determining identity, and helping to shape individual life-chances. In addition, the questioning of conventional concepts such as society suggests that the message of the book will be considered seriously... this is a well-written and well-organised book... the influence of the authors' conceptualisation of disorganised capitalism was great: I would suggest that the argument in this book will be equally influential' - Urban Studies

`Covers a large territory, but a couple of readings reassure one that the various topics discussed are not as diverse or as disconnected as at first appears. The ground covered is considerable, and no review could be a substitute for reading the book, one gets the feeling that Lash and Urry's book may come to be regarded as a milestone in the development of post-postmodernism.... The introductions and conclusions to each chapter are carefully written and carefully written and clearly directed to establishing a connective chain of reasoning to demonstrate the relevance of the concept' - Work, Employment and Society

`This book is a tour de force. The portrait it draws of an increasingly reflexive world of flows is a major contribution to our understanding of society and space' - Nigel Thrift, University of Bristol