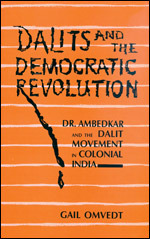 Share
Other Titles in:
Political Sociology | Sociology (General)
January 1994 | 352 pages | SAGE India
Download flyer
This important book traces the history of the Dalit movement from its beginning in the 19th century to the death of its most famous leader, B.R. Ambedkar, in 1956. Focusing on three states—Andhra,Maharashtra and Karnataka—Dr Omvedt analyses the ideology and organization of the movement and its interaction both with the freedom struggle(particularly with Gandhi and Gandhism) and the `class` struggles of the workers and peasants (and their dominant ideology-Marxism). She also provides a historical account of the origin and development of the caste system.
Introduction
Towards a Historical Materialist Analysis of the Origins and Development of Caste
Caste, Region and Colonialism: The Context of Dalit Revolt
Emergence of the Dalit Movement, 1900-30: Nagpur, Hyderabad, Andhra, Mysore
Emergence of the Dalit Movement, 1900-30: Bombay Presidency and the Role of Ambedkar
The Turning Point, 1930-36: Ambedkar, Gandhi, the Marxists
The Years of Radicalism: Bombay Presidency, 1936-42
`Ambedkarism`: The Theory of Dalit Liberation
Mysore, 1930-56: The Politics of Ram-Raj
Andhra and Hyderabad, 1930-46: Foundations of Turmoil
Hyderabad and Andhra, 1946-56: Revolution, Repression and Recuperation
Conclusion
Index