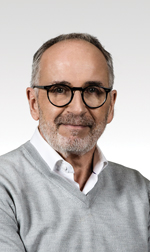 For over twenty-five years, Dr. Steve Constantino has captivated thousands of teachers, administrators, school board members, and businesspeople from the United States and around the world. His keynote presentations and workshops have been featured in local, state, regional, national, and international conferences. Working as a high school principal in 1995, he stumbled across research about the effects of family engagement on student learning and was immediately convinced that this was the missing ingredient in helping all children learn.

Steve’s work quickly gained national prominence, and soon he began traveling the United States, speaking, and working with all types of educators, school board members, and businesses to promote sound practices in family engagement that result in increased academic achievement for all students. His natural gifts as a motivating orator, coupled with his knowledge and practical experience, make him one of the most sought-after speakers in the field of family engagement.

Steve began his career as an instrumental music teacher and later became an assistant principal, principal, deputy superintendent, and district superintendent. Steve is the former chief academic officer and acting superintendent of public instruction for the Commonwealth of Virginia. Today, Steve is an executive professor at the William & Mary School of Education where he teachers in the Education Policy, Planning and Leadership department and continues to travel the globe helping schools, districts, and organizations to engage every family.