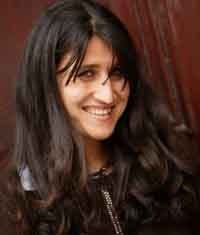 Sangita Shresthova is currently the Research Director of the Media Activism and Participatory Politics Project (MAPP) at the Annenberg School for Communication and Journalism, University of Southern California, Los Angeles, USA. She is a dancer and media artist who holds a PhD from the Department of World Arts and Cultures, UCLA. She earned an MSc degree from MIT’s Comparative Media Studies program where she focused on Hindi film dance. Sangita’s work has been presented in academic and creative venues around the world including the Other Festival (Chennai), the EBS International Documentary Festival (Seoul), and the American Dance Festival (Durham, NC). Her writing has appeared in academic publications like Global Bollywood, an edited volume on Hindi cinema. Sangita was the Programming Director of the Prague Bollywood Festival, an annual event she helped found nine years ago.

Sangita studied Bharata Natyam under Malathi Srinivasan in Chennai, as well as Charya Nritya (Nepalese Dance), Kalaripayat (South Indian martial arts), and contemporary dance techniques. She was a guest choreographer for the Constanza Macras/DorkyPark production “Big in Bombay.” Her documentary titled, “Dancing Kathmandu” (2007), was a curtain raiser at the Kathmandu International Mountain Film Festival. Sangita continues to explore the possibilities of Indian dance, film, and new media through BollynatyamTM, the company she founded in 2004.

Is It All About Hips?