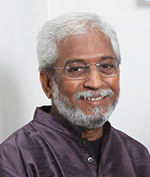 K. P. Jayasankar is a retired professor, School of Media and Cultural Studies, TISS, Mumbai. He is involved in media production, teaching and research and has played a key role in setting up the School of Media and Cultural Studies at TISS. Jointly with Professor Anjali Monteiro, he has made over 35 documentaries and won 33 national and international awards at documentary film festivals. Their most recent awards for their Kachchh trilogy are the Basil Wright Prize 2013 for So Heddan So Hoddan (Like Here Like There) and Commendation of the Jury, Intangible Culture Category, 2019, for A Delicate Weave at the Royal Anthropological Institute Festival, United Kingdom. Along with Professor Monteiro, he was an invited artist at the Kochi-Muziris Biennale 2018, where Saacha (The Loom) was showcased as an installation. Professor Jayasankar has served as jury and as festival consultant and director at several film festivals in India. He has mentored many student and fellowship documentary film projects as commissioning editor. His most recent publications co-authored with Professor Monteiro are A Fly in the Curry: Independent Documentary Film in India, SAGE Publications, 2016, for which he received a special mention for the best book on cinema in the President’s National Film Awards, 2016, and DigiNaka: Subaltern Politics and Digital Media in Post-Capitalist India, co-edited with Anjali Monteiro, K. P. Jayasankar, Amit S. Rai (Eds.), 2020. He is a recipient of several scholarships and awards, including the DAAD scholarship at Heidelberg University, the Howard Thomas Memorial Commonwealth fellowship at Goldsmith’s College, London, the Erasmus Mundus scholarship at Lund University and the Key Technology Partner scholarship at University of Technology, Sydney.
Many Voices, Many Worlds
A Fly in the Curry