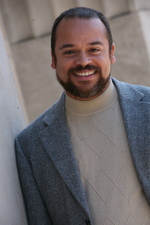 Kirt Wilson’s research moves from African American to presidential rhetoric and from the history of rhetoric to the rhetoric of history. A graduate of Northwestern University, he is currently an Associate Professor and the Director of Graduate Studies for the University of Minnesota’s Communication Studies Department. He has won numerous awards from the National Communication Association including the New Investigator Award (2001) and the Karl R. Wallace Memorial Award (2002). His book The Reconstruction Desegregation Debate (2002) published by Michigan State Press won NCA’s Winans-Wichelns Memorial Award (2003) and the Marie Hochmuth Nichols Award (2003). In 2004, the University of Minnesota honored professor Wilson with the prestigious McKnight Presidential Fellowship, an honor extended to only three to four tenured associate faculty each year. Kirt Wilson teaches graduate courses on U.S. public discourse, textual criticism and methods, African American civil rights rhetoric, and theories of race, culture, and public memory. Currently, he is working on two book projects. The first investigates the intellectual and conceptual history of “mimesis” or imitation in the nineteenth century and the second is a study of the sentimental aesthetic in contemporary commemorations of the civil rights movement.
The SAGE Handbook of Rhetorical Studies