He has taught and published in the areas of the philosophy of social sciences, metaphysics and epistemology, history of philosophy and political thought, and the ethics of technoscience. He currently works on the relationship between philosophical issues in cognition and social ontology.

He is the editor of a forthcoming edited volume: Mind and Society: Cognitive Science Meets the Social Sciences, to appear in the Synthese Library of Studies in Epistemology, Logic, Methodology, and Philosophy of Science, and co-editor of another forthcoming edited volume titled: Wealth, Commerce and Philosophy published by The University of Chicago Press.

Encyclopedia of Philosophy and the Social Sciences 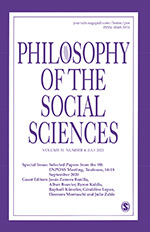