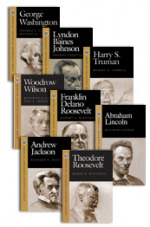 Share
Other Titles in:
Political Biographies | Political History | Presidency
November 2003 | CQ Press
Download flyer
Save 25% When you buy all eight volumns in the American Presidents Reference Series Set. Each volume in this series is organized around an individual presidency and gathers a host of biographical, analytical, and primary source historical material that analyzes the presidency and brings the president, his administration, and his times to life. The series focuses on key moments in U.S. political history as seen through the eyes of the most influential presidents to take the oath of office. Unique headnotes provide the context to data, tables and excerpted primary source documents.'' ''The format of each book follows the same organization and includes:''''Introduction ''Biographical Sketch''Campaigns and Electoral Strategies''Administration Policies''Crises and Flashpoints''Relationship with Major Institutions''After the White House (or presidential legacy)''Key Figures in the Administration''Chronology ''Index'''''' ''This is a valuable series for academic and high school libraries as well as public libraries and their patrons interested in American presidential history.'' ''The American Presidents Reference Series Set includes:'' ''Abraham Lincoln ''Andrew Jackson''Franklin Delano Roosevelt''George Washington''Harry S. Truman''Lyndon Baines Johnson''Theodore Roosevelt''Woodrow Wilson''